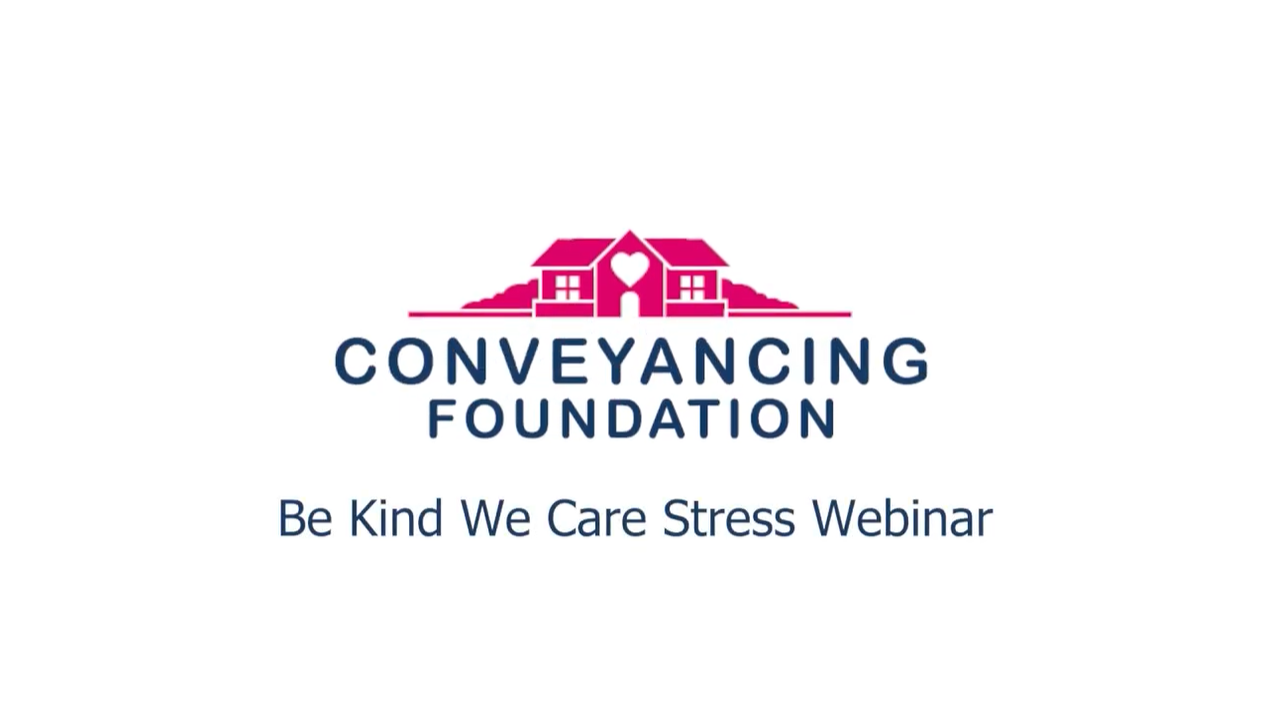 Conveyancing and legal experts have spoken out about the stresses and strains facing those working in the property and legal conveyancing world as we move out of the Pandemic in The Conveyancing Foundation’s latest ‘Be Kind We Care’ webinar.

Speaking at the webinar to mark Stress Awareness Month, Conveyancing Foundation chairman Lloyd Davies said that while relationships had improved between conveyancers and estate agents since Pandemic days, it was the opposite for clients who could often be “less understanding and more demanding” with their behaviour “fuelled by the very buoyant property market”.

Lloyd, also Managing Director of Convey Law, said: “Clients’ behaviour during the Pandemic was quite good in many respects. They were quite patient because they understood the problems we had. I think less so this year.

Meanwhile, Lloyd said that he believed the ‘Be Kind We Care’ campaign launched by the not-for-profit Conveyancing Foundation during the Pandemic, prompted by growing reports of aggressive professional behaviour in the property, conveyancing and legal sectors, had encouraged many working in those industries to consider and manage their dealings with each other to ensure more kindness:

“I believe that relationships with others in the property world like estate agents and introducers of business have become a lot better. They are not quite as aggressive and are far more understanding of our predicament as conveyancers which is a good thing. Of course, it’s also all down to supply and demand: if they are nasty to us, we don’t work for them! It’s quid pro quo!

“We do think that we are raising standards with ‘Be Kind We Care’ and I hope everyone can keep going in that respect. It is so important to be nice and pleasant to each other in terms of stress. A nasty comment can ruin someone’s day. I also believe that employers do understand that if they don’t treat their staff well, they will walk.”

Lloyd also said conveyancing was still very busy in the aftermath of the Pandemic and living through a period of “peaks and troughs”, explaining:

“We are in a little bit of a situation in the conveyancing world. The industry has had a very busy and difficult time with people working from home but also the stresses within our environments with the SDLT deadlines which gave us false set of waves throughout last year leading up to September was hugely stressful.

“I don’t think they have quite gone away and certainly the volume of instructions coming through is quite considerable and managing capacity and the amount of work is an important factor. We had a dip in completions at the beginning of the year but we were back to a high at the end of last month. We are living through a series of peaks and troughs and we need a more level playing field!”

Webinar host LawCare Chief Executive Elizabeth Rimmer said managing the expectations of clients whose transaction was probably “the biggest thing going on in their lives” while conveyancers might be dealing with 100 transactions was key:

“An understanding of why people might be behaving in a certain way is vital,” she stressed.

Jason Bull, a mentor at Agents Together and Chief Operating Officer of easyproperty.com, said estate agents, solicitors and conveyancers had “a very similar job dealing with people with high stress and high anxiety levels which extends into our staff”, and it was “valuable” to hear each other’s viewpoints.

He said tolerance in dealing with each other was “all down to education”, adding:

“I am pleased to hear that estate agents are becoming more tolerant. Sometimes problems can arise when agents don’t understand where their job ends and where the conveyancer’s job begins. I have seen agents interfering with a conveyancer’s job and that just adds extra time, extra complaints and layers of conflict and yet we share the same problems and by talking to each other, we can solve an awful lot of them.”

He said: “I work at a high level in Agents Together and at an estate agency so it is useful to consider the boundaries between the role of a conveyancer and an agent but also how we manage boundaries in a hybrid world. People are more depleted than they normally are. Some people came out of the Pandemic relatively unscathed while others experienced illness or even bereavement. Some people found it difficult working from home while others enjoyed it. One size does not fit all.”

Jason welcomed increased discussion on mental health and wellbeing in the property industry, and said to some extent this had “previously been a taboo subject”, adding:

“Estate agency has been a macho, ego-driven environment but charities have opened the door to discussing stress and mental health and wellbeing. If worries, doubts and concerns are not discussed, they manifest.”

Jason said his own agency had looked at ways of reducing stress and had now made a pledge to ensure staff only sent emails during working hours:

“Emails sent out of working hours bleed into someone’s time and bleeds into being anxious after hours,” he commented.

Hannah Beko, a partner at Gunnercooke llp and a mental health trainer, said that while there was more discussion about mental health issues and more resources than ever before – “what is out there is not reducing numbers”.

She shared tips on stress and burnout, emphasising the importance of keeping an eye on colleagues and on changes in behaviour in them and in ourselves.

She said: “There’s a lot of positives in terms of discussion and support but we are still at the tip of the iceberg and we need to be more alive to that.”