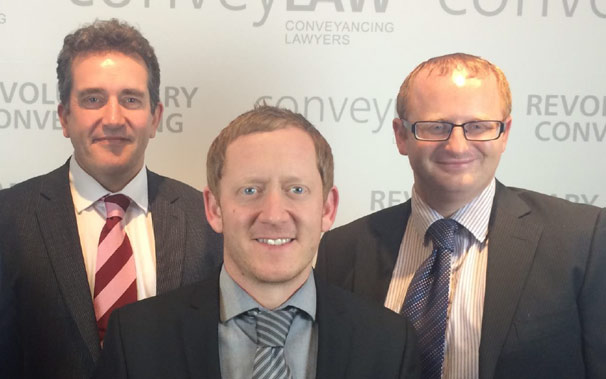 CLC approve appointment of Head of Legal Practice and Head of Finance & Administration at conveyancing specialists.

These internal appointments are the latest from the Investors in People accredited company, following the recent appointment of Rob Hosier as Sales and Marketing Director. All three individuals joined the company in less experienced positions before undertaking further training and progressing to their current roles, highlighting the company’s commitment to internal training and promotion.

New Head of Legal Practice, Gareth Richards, joined Convey Law 11 years ago as a Conveyancing Assistant, qualified as a Licensed Conveyancer and became a Legal Director at Convey Law in 2012.

“Gareth has shown an unwavering level of commitment to Convey Law and to maintaining the highest standards in any task that he undertakes. Gareth very quickly became one of the most successful conveyancers in our history and has continued to excel in his role as Legal Director. He played a key role in our achieving the Legal Eye Best Quality Standard and ABS Accreditation last year and I am proud to be able to work alongside one of the most innovative and diligent men in the industry.”

New Head of Finance and Administration, Gareth Evans, has worked for Convey Law for over 12 years. Qualifying as a Legal Cashier via the Institute of Legal Cashiers in 2005, he was appointed as Accounts Manager in 2009 and went on to transform the Accounts department at Convey Law into one of most effective auditing and accounts teams in the UK.

“The achievements of the Account Department under Gareth’s leadership have been excellent and are a direct result of the high standards and attention to detail that Gareth demands of himself and his team. The Accounts team have an exemplary record in relation to CLC audit requirements and their conveyancing audit facilities are unprecedented. Gareth is a true professional and a pleasure to work with”.

Last year, with the assistance of Mr Richards and Mr Evans, Convey Law won a coveted Sunday Times Conveyancer of the Year Award, in recognition of their industry leading conveyancing procedures and client service. The company also has representation on the management panel of both the Conveyancing Association and the Society for Licensed Conveyancers.