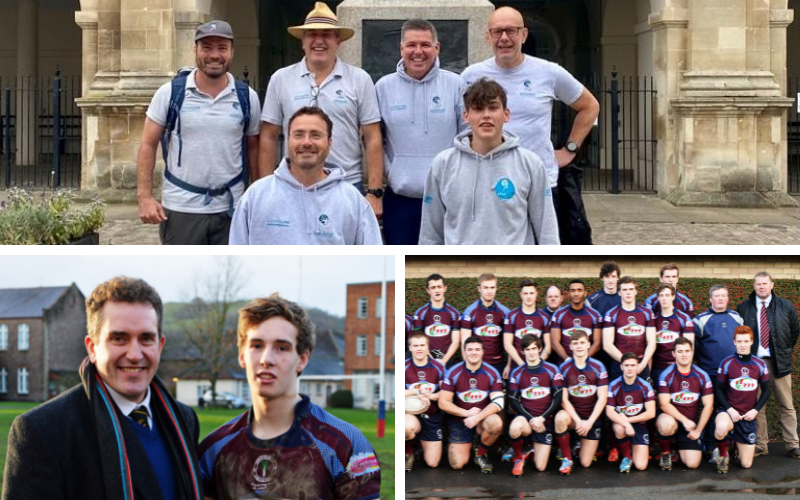 Convey Law’s Managing Director, Lloyd Davies, has set out on an intrepid summer challenge along Britain’s longest ancient monument – Offa’s Dyke – to raise £15,000 for a cause very close to his heart – the Mindstep Foundation, set up in memory of his son Max.

Lloyd and his wife Tracey set up the Foundation to fund mental health research, awareness and support after their eldest son Max tragically died aged 22 in 2018 after a battle with clinical depression.

Along with eight supporters, Lloyd started the 177-mile walk across the famous Offa’s Dyke ramparts along the England-Wales border from Prestatyn in north Wales on Sunday (July 25).

Father of four Lloyd, also Operations Director of the Conveyancing Association, said the walk would be a “pilgrimage” to Max and his “beloved Wales” and the funds raised would be donated by the Foundation to a wellbeing centre at a Welsh school, St Alban’s in Pontypool, where Max volunteered in the summer before he died.

Fellow trekker Richard McLennan, a teacher from St Alban’s, said: “We are attempting to raise £25,000 to provide the school with a wellbeing gym to complement our wellbeing intervention centre The Sanctuary. The gym will provide support for the wellbeing of many hundreds of young people at St Alban’s now and in the future. Some of our youngsters are very vulnerable and, accordingly, face daily challenges that many of us cannot comprehend.”

He added: “Max undertook voluntary work in supporting our most vulnerable pupils and those with additional learning needs. Max was an energetic and deeply empathetic young man who was quick to understand and adopt the school’s “caring” ethos by putting our pupils’ wellbeing at the forefront of how he supported them. He established excellent relationships with our pupils from the start!”

The walk will also mark a very sad milestone for the family – the third anniversary of Max’s death – in August. Max, who was a third-year student at Canterbury Christ Church University in Kent when he died, was a talented rugby player at Monmouth RFC and a former pupil at Monmouth School for Boys in Wales.

Lloyd explained that his son had been struggling for a year with clinical depression before his death and despite regular counselling, medication and total family support, he could not be saved.

He said: “In the wake of our devastating loss, we started to look at the statistics for the sheer number of men who take their own lives every week – over 80 men in England and Wales which is equivalent to over 11 every day and over 4000 a year, and we were driven to try and make a difference.”

They went on to set up the Mindstep Foundation, which so far has raised over £110,00 for mental health research and support.

Lloyd explained: “The Mindstep Foundation was established following Max’s passing to fund research into the causes of suicide and support those who have been bereaved or who are at risk of suicide. As Max’s family, our mission is to take steps, however small, towards ensuring that no one suffers the loss of a loved one to suicide.

“Suicide is a hugely sensitive, complex issue with a multitude of causes. The very nature of a death by suicide means we can never fully know the reasons behind it.”

The Mindstep Foundation has also committed to raising £100,000 over the next two years to help fund landmark work at the University of Glasgow into the causes of suicide.

Lloyd, a prolific fundraiser, who has already undertaken other challenges for the Foundation and raised funds for causes including the Ty Hafan Children’s Hospice in Wales, has sprung back from being hospitalised on a previous charity walk with a septic toe.

He said he had been in training “building up his stamina” after setting up an informal walking club with friends which inspired him to launch the challenge in Max’s memory.

Praising his fellow trekkers, who include family friends and his godson, he said:

“This is a huge undertaking. Offa’s Dyke crosses the mountainous Welsh Marches and was built in 790 AD by King Offa to keep the Welsh in Wales! There are some very tough and mountainous stretches across some stunning landscapes including Wye Valley and the Brecon Beacons.

“I am looking forward to the walk but also realise it will be a very tough challenge. We aim to walk 20 plus miles a day and get to Hay on Wye at the end of the first week and then undertake the rest of the walk as time allows over the summer.

“As a family, we are really grateful to everyone taking part and to everyone who continues to fundraise on behalf of the charity and donate to it in memory of Max.”

For further information and to support the Offa’s Dyke Charity Trek: please visit